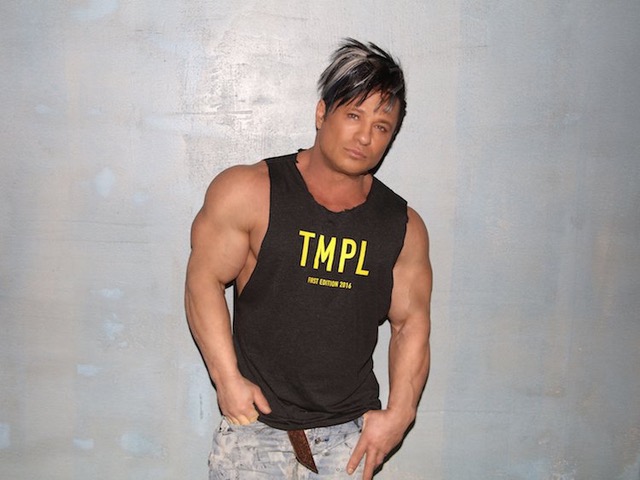 Shamelessly sexy DavidBartonGym clubs first emerged in New York City in the early 90s, revolutionising the fitness industry and becoming a hotspot for celebrities worldwide. Russia has spent years waiting with bated breath for the gym to migrate to their soil; a wish that will soon finally be fulfilled in Moscow. We spoke with David Barton about the past, present and future of his sexy sports empire.

HFT: Hi, David! First of all, we want to congratulate you on the grand opening of your new club in Moscow. We’re going to lay our cards on the table here – we’ve been waiting for a Russian David Barton club for a long time. The first images of the new club make it clear that this will be something completely different to what the Russian fitness industry is used to. For those who aren’t familiar with your work, please tell us: what exactly is a David Barton club? Who is David Barton?

David: I first came into the fitness business from the world of nightlife in the early 90s, with absolutely no prior knowledge whatsoever. Looking back, I think that was my advantage – when I thought about my club and how I wanted it to stand out, I saw it as a business with two main objectives. The first is the tangible, measurable result of going to the gym; what it does to your body. The second is a more of a subjective experience. It’s not so much design as emotional experience; it’s okay to be motivated to come to the gym but people need to actually like it, to be inspired by the interior and the atmosphere to stay longer and to come back.

HFT: Your clubs are known for their unique, “shamelessly sexy” design. Why is this theme important to you?

David: I want to start by separating the concepts of sexy and sexual. Are my clubs sexy? Yes. Are they sexual? No. Working out is an inherently sexy experience – people with beautiful sweaty bodies in tight clothes moving to music, of course it’s sexy. When I first got into the fitness business, people didn’t want to go to the gym but they would wait all night to get into a nightclub. Why? Because there’s something about the environment of nightclubs that draws people in and makes their hearts pound; it’s an experience. I saw the opportunity that gyms had missed, to use things like high quality music and lighting to bring the sexy nightclub experience to a fitness club to attract people to gyms. In addition, visualisation and sensuality associated with other emotions stimulate the imagination; they help people to imagine how their bodies could physically change from going to the gym. We help them to visualise things like that.

HFT: Will the new club in Moscow be the same sort of ‘sexy’?

David: The design of the Moscow club – Anvil – was based on the owner’s expectations. He told me how he sees the club, and we tried to give it the right shape. When I was designing Anvil I wanted to embody the streets, nightlife and glamour of Russia’s capital. I wanted to take the very best of what gives rise to people’s motions: music, lighting, sexy clothes. It’s quite difficult to tell you what makes something sexy, I just see things and I say “Yes, that’s sexy”.

HFT: Does this mean that your clubs are for trendy, glamourous people? What about older, overweight or more conservative visitors who come to the club primarily for health and not for a beautiful body? Is such a club suitable for them?

David: In my opinion, it’s more about taste. I wanted to do it for the “cool” people, and what distinguishes them from others is not that they have more money but that they have taste. It’s not at all about money. In the modern, technological world, taste and creativity are more and more appreciated. Such a club differs from chain fitness clubs and gyms in its style and personality. Each David Barton club is different and attracts those who appreciate the unique ambiance I strive to create.

HFT: LGBT people are known to like your clubs as well. Are you intentionally attracting different communities to your clubs?

David: I would like to see different people, yeah. I like it when there’s diversity: different people from different age groups with different interests. It’s interesting when men and women who may not have crossed before in ordinary life unite and work together. Then, special energy is born. If there’s only one type of people in the club, it gets boring. As for the LGBT community, I think they were doing fitness even before it went mainstream; they just appreciate the gym more. These people are part of the group responsible for starting fashion trends.

I opened my first gym in the 90s, at the height of the popularity of rock stars. This club was visited by supermodels, fashion designers, and TV stars such as Marc Jacobs, Calvin Klein, Anderson Cooper, Anna Wintour, Patty McCarthy and Zoe Saldana, as well as media people of magazines like Vogue and Harper’s Bazaar and so on. Perhaps this is one of the reasons why the club was popular, including among LGBT people. In addition, the club was located in the Chelsea area, which was considered “home” by the LGBT community. Compared to clubs in other areas, there were completely different visitors. As for the club in Moscow, I don’t care what ages, colours or sexualities go there. What I do know is that those who go there will be that little bit “cooler” than the rest of the world.

HFT: Your TMPL project has been called NYC’s most high-tech fitness club with smart equipment. How did you achieve this?

David: I think it is very important that a person is engaged in the right way for their metabolism. At one time I was engaged in biochemistry, and I was lucky enough to find gurus who developed new approaches to fitness training, studying how human metabolism works and how you can achieve quick results. You can’t have a standard number of pre-designed training programs. Each program is individual for each person, because each person’s metabolism is different. In the 21st century technology has massively progressed both in capability and simplicity, and we’re now able to create diagnostic programs that help each individual to find the best exercise and nutrition for them to achieve their desired result in optimal conditions.

HFT: Eleven DavidBartonGym clubs filed for bankruptcy in 2017. What happened? How did you get through this “breakup”? Is it hard to say goodbye to what you have created?

David: At the time of bankruptcy, I was actually no longer in the company, but my name remained with my former partners. I had sold my company to investors in 2010 with the goal of putting the business in good hands. The new owners had a lot of disagreements about the future path of development; one of the investors wanted to make a network club like a fast food chain. In fact, it’s hard for me to say exactly what happened after I left, but I was very sad when the company went bankrupt. It was a great business with a strong brand that was loved by many. In 2016, we began TMPL Gym, and many DavidBartonGym clients came to us.

HFT: What is happening with the fitness business now, in your opinion? How has the pandemic affected it? How will the industry develop further?

David: People have definitely begun to understand more about the importance of health. Obviously the best way to avoid illness, including Covid, is to have a strong immune system because that means your body is healthy. If a person is overweight or has diabetes for example, this is a big problem. During lockdowns, many were forced to think about how to keep fit without gyms, because the gyms were all shut! The positive motivation to keep fit and healthy will almost certainly carry on when the pandemic is over: fitness will be even more in demand, and people will be more thoughtful about choosing an approach to their training process. This is a big benefit for me and my projects since I always approach the creation of training programs for clients from a scientific point of view. I take into account the biochemical processes of the human body, its lifestyle, habits and expectations, and on the basis of this I develop a specific program for each client. Now is the time to put the toys down and seriously think about what will help you to be in good physical shape.

HFT: In what other countries would you like to open David Barton clubs?

David: Oh, what a good question! I want to be everywhere! Seriously though, I’m really interested in the German fitness market. The fitness movement basically came from Germany. It seems that gyms first appeared there 150 years ago; people went to sports clubs where they were lifting weights and drinking beer. London is certainly interesting as well, it’s a magnificent city. The emerging market in the Middle East has lots of potential, Asian countries too as they’re way ahead of us in technology. In South America people are very body-conscious, for example, Brazil where everyone goes to the gym, and when you go to the beach it looks like a bodybuilding show. There are many places on earth where I would like to build clubs. It’s exciting to be part of that fitness revolution around the world.

HFT: Another very important question. When will we see you in Russia? Are you planning to come to the opening of Anvil in Moscow?

David: While working on the design of the Moscow club, I was supposed to come to the capital of Russia several times. But the pandemic adjusted our plans, and we ended up doing all the work online. I definitely plan to be in Moscow in September so I can come to the official opening of the club, and I really hope to see all of you there.

Interviewer: Inga Kouru-Nedaskovskaja
Many thanks to Leila Timergaleeva for help with the organization of the interview

National Fitness Day to get millions of people physically active