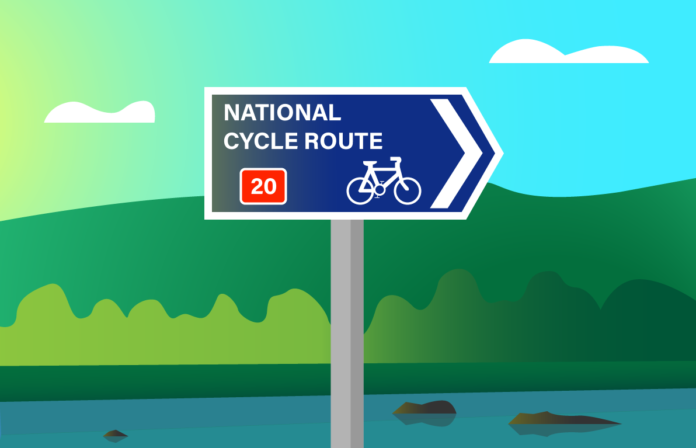 When travelling around London, there’s no better way to do it than by bike. Traversing the UK’s capital on two wheels is not only the most invigorating way of getting from A to B, but it’s often – surprisingly – the quickest, too. And if that wasn’t enough, you get to see all the landmarks dotted around the city as you ride. So whether you’re planning to pick up a hire bike for an afternoon outing or looking for some out-of-town action in London’s leafy suburbs, here are the 5 nicest Cycling routes in London to try.

Stretching from the East End to the Essex hinterlands, Epping Forest is a traffic-free dream that’s suitable for the whole family. Its 20 miles of gravel paths and woodland trails are perfect for those who aren’t confident riding on roads, and there’s a 13-mile route around its circumference (following the ‘main’ and ‘green’ paths) that doesn’t include a single section on tarmac. What’s more, you don’t even need to own a set of wheels to enjoy it. Head along to Go Further Cycling and get the whole gang kitted up with some hire bikes before hitting the trails.

If you’re a London-based road cyclist, there’s a good chance you’ll have ridden around Richmond Park. The city’s largest green space is home to a triangular-shaped loop of roads that offers up the ideal training location for riders who like going fast. Although it’s possible to complete it either clockwise or anti-clockwise, the former is best for those yet to find their climbing legs as it skips the park’s steepest ascent (meaning you get to fly down Broomfield Hill instead). And once you’ve ticked off a lap or two of the much-loved park, Colicci is a great pitstop for a coffee and slice of cake – you’ll have earned it.

Want to hit up London’s sights? Skip the open-top bus in favour of seeing some landmarks under your own pedal-powered steam. Setting off from Tower Bridge, it’s possible to go for a car-free, sight-filled spin along Cycle Superhighway 3, which passes Tower Bridge, the Tower of London, the London Eye, Houses of Parliament and Buckingham Palace en route to Hyde Park. Once you reach the green expanse, you can pootle your way around many of its paths and lanes. But if you’re a stickler for routes, carry on along CS3 and you’ll soon find yourself at the Serpentine and the picture-perfect views across London’s most beautiful lake.

CANALSIDE CRUISING FROM WEST TO EAST

London’s network of canals is an amazing place to head to if you’re looking to escape the hustle and bustle of the city. The canal-boat-lined towpaths are also a great way of getting around the capital, and the walkways are a constant flow of cyclists, runners and walkers of all ages. The best of the bunch is Regent’s Canal, which runs from Paddington to Limehouse Basin, although it’s worth finishing your ride in Victoria Park with a lakeside pastry from the Pavilion Cafe rather than continuing down the uninspiring stretch of waterways to the Thames. You’ll pass Little Venice, London Zoo and Camden Market along the way, before the final stretch takes you from Angel to Hackney in no time at all.

On the eastern edge of Finsbury Park lies the start of the Parkland Walk. A disused railway-turned-nature-nirvana, the relatively flat path winds its way to Highgate beneath a canopy of tree-lined verges and graffiti-strewn bridges – although as it’s a footpath, you might have to dodge the odd jogger or dog walker along the way. After a short section of road cycling (and one thigh-burning climb) in the direction of Muswell Hill, the trail starts again on Cranley Gardens, where it continues uninterrupted to Alexandra Palace. The panoramic views out across the city from its terrace make the aches from any lingering lactic acid in your legs worth it – and you can even see sights south of the Thames from your vantage point.

Based on materials of CNTraveller

Rental E-scooters trial to launch in London in June